In New England it’s late summer and the days are growing shorter, but still the sunshine-infused hours flow by lazily. The breezes are easy, not yet carrying down Arctic briskness and warnings of winter.

Floating on the wind, in sync with the slow energy of the season, are a myriad of butterflies—some white, some yellow, and some orange. Of note this year, and hooray for this as their population has been of concern, is a seemingly large number of monarchs (Danaus plexippus). These beauties maneuver the lift and fall of air currents with astounding grace.

Unfortunately, butterflies like to crisscross and hover over the back roads. In a speeding car, they are a challenge to miss, the flyers moving much more slowly and randomly than the hulk of metal propelled by fuel in a straight-forward trajectory. It’s common for the hapless butterfly to glance off of the windshield, or hood, and tumble to the road. I guess it’s human conditioning to say, “Oh well, it’s just an insect. What can one do?” This thinking is likely further justified by the idea that one has to get here or there as quickly as possible to do this or that, as if that task is one-thousand times more important to the grand scheme of the universe than the said butterfly’s mission to sip a flower or a raspberry, to pollinate, and prepare to travel thousands of miles to their winter hibernation grounds in Latin America.

While I never like hitting any living creature large or small, I will admit that I was one of those humans that made these justifications in my mind. That is, until this summer, when I took the time to observe the reality of these mishaps of vehicle to Lepidoptera, the insect order label taken “from the Greek, ‘Lepis’ = scale, ‘pteron’ = wing” (“Biology of the Monarch”).

This summer when I have witnessed a butterfly hit by a car, especially a large monarch, I’ve stopped to move it off the road. I do this just in case it was not injured badly and might still live. Sometimes my efforts are fruitful: the butterfly emerges from being stunned, grabs my finger with its legs, and takes flight. However, more frequently what I have discovered is rather horrifying: rarely is the insect dead. Instead it is alive with some part of its body maimed, be it its wings, legs, or torso. Alive, they lay in the gravel or on the burning hot tar awaiting death. For hours.

I’ve taken to mercy killings, putting them to a quick and painless end, though it saddens me to do so. I’m well aware that an insect’s experience, biologically speaking, of “pain” or “death” is considerably different than human awareness of such things. Science even indicates that they don’t really feel pain. I argue even so, to lie maimed on a road, is this not suffering in whatever the capacity of the experience?

The other evening I was taking a walk when I happened upon yet another monarch lying in the road. It’s astounding, actually, when you start to pay attention, how many are hit on a daily basis. I bent to pick it up, hoping it was dead having had a quick ending. But no, it was alive, it’s antennae swiveling this way and that. I inspected it carefully in my palm—wings were intact, torso intact with a bit of gravel and possible slight body injury on one side, a couple of crumpled legs. Maybe it will have a chance, I thought.

I carried it home where I studied it further with a flashlight, determining that recovery just might be possible.

Lining a small box with some paper towels and grass, I put the butterfly in the box, and set the box in the warm garage for the night. I added in a geranium blossom and some flowering clover. Not exactly sure what butterflies eat, I drew upon my knowledge derived from helping a client write a book about raising bees and added in a lid full of sugar water, put a dab of honey on a piece of clover, and put in a thimbleful of plain water, then propped the monarch up near the lid of sugar water. I was concerned that it didn’t seem to want to use its two good legs and had yet to flutter its wings. But its head moved all about curiously and its antennae continued to twitch this way and that. It seemed not to be suffering egregiously. I put on some classical music on my little garage radio, figuring that studies have shown it to be soothing to plants, why not an injured insect?

I’ll give it the night, I thought.

While preparing dinner—salad with blueberries and raspberries—a little light went off in my mind. I remembered seeing butterflies hovering around the black raspberry bushes out back, possibly sampling the berries. So I mushed up a raspberry and stuck it in the lid of sugar water. The monarch immediately unrolled its proboscis (its straw-like mouth). I joyfully watched it checking out the raspberry, then turned out the garage lights to resume my dinner preparations. Checking occasionally, I found the butterfly was still moving its proboscis about near the raspberry and turning its head this way and that. A positive sign. Yet I was disturbed that it had yet to move around otherwise.

Before bed, I checked on the butterfly one last time. This was about 5 hours after I had picked it up from the road. The monarch had stopped moving, its antennae resting at half-mast. I thought perhaps it was sleeping. Do butterflies sleep? I didn’t know. It’s amazing how little we humans really know about the workings of the natural world, yet we impact it daily. Leaving the classical music on, I went to bed. I did not hold out great hope … it seemed the insect’s legs were not working and its wings had perhaps been paralyzed by the hit. Still, it did not appear to be suffering and I wanted to give it a chance.

The next morning, I got up to see if there was any improvement for the injured member of the family Nymphalidae, subfamily Danainae. The monarch sat quite still, in exactly the same position at the lip of the sugar water, antennae at half-mast. Dead. Part of me was relieved that I didn’t have to kill it to end its misery. And perhaps, at least, its last hours had been pleasant—a warm, quiet garage, soft paper towel with fragrant grass and geranium, a taste of raspberry, and classical music—more pleasant than lying in the gravel, waiting.

Regardless of the current pronouncements of science about if and to what extent each living insect, animal, tree, or plant “feels” or doesn’t feel, or to what degree they experience consciousness, I believe there is a lot we don’t understand about energy, consciousness, and the bend of the universe. As Socrates professed, “the only true wisdom is knowing that you know nothing.” I try to keep this open mind and heart. I recognize that nature has her own hierarchy of suffering: survival of the fittest, needing sustenance to survive sometimes taken in cruel ways. And at the same time, I feel it is entirely possible and true that all matter and all living beings are manifestations of one, divine and universal energy—call it god if you will, the goddess, the Great Spirit, the outward thrust of the Big Bang. I felt there was a bit of me in the life of that butterfly and a bit of that monarch’s essence within me. It deserved my compassion.

This summer has brought a shift in my awareness of even the little creatures that may fall in my path, and so, to the extent that it is safe for me to do so, considering the roadway, the traffic behind me, I brake for butterflies. 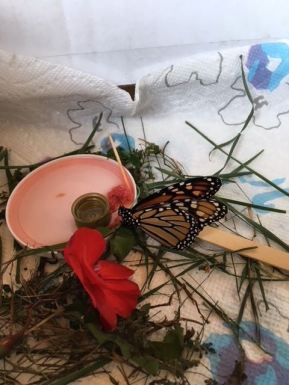 2 thoughts on “Braking for Butterflies”