It’s nice that some folks will be able to be connected to the Internet better with Starlink around the globe. And what I am about to say is NOT meant to inspire guilt for using Starlink, but more to raise important existential questions. I am quite concerned about the number of satellites Elon Musk’s company, SpaceX, and other companies, including Amazon, will eventually be launching into low Earth orbit (LEO). Currently, according to an article in Science, and another article from CNBC, SpaceX has about 2,000 satellites in orbit, with FCC approval already for another 12,000. SpaceX has plans for a great many more satellites than that. There are predictions that eventually we could have 100,000 satellites in LEO. Hello, space junk!

Already, monetizing LEO is affecting the field of astronomy in significant ways. Astronomy is a key discipline for humans to sort out the mysteries of the universe and our place in it. SpaceX has put visors on subsequent satellites after the first outcry from both night sky viewers and astronomers. The visors help some, to the naked eye, but not perfectly. But they do not solve the interference in astronomy work. Other companies may not care about whether their satellites can be seen or not. As I’ve read, there is no global blueprint for fielding this issue.

Already I am noticing, shortly after evening falls, more wobbly, zigzagging satellites crossing my view of the stars. Sadly, much of humanity lives in so much light pollution now, they can’t see the stars. But for those of us that can, stargazing is an age-old human pastime that is important, I believe, for well-being. Seeing the Milky Way, constellations, shooting stars, and sometimes even the aurora borealis reminds us of the vastness of the universe, and keeps alive wonder and appreciation of beauty. The night sky reminds us that we don’t have all the answers to how things work. In fact, on a grand scale, as Einstein liked to remind us, we know very little. Lastly, what of migratory species that navigate by stars? Do we know what interference this may have?

All of this begs the question: Who owns space? Doesn’t it “belong” to all living creatures on Earth? Do we have a right not to have the night sky obliterated by LEO objects? Really, if you get right down to it, space belongs to no one. Yet, there are also plans, in this revived space race, to sell off parts of the moon to the highest bidders for mining and other plunder.

We have so many difficult issues down here on the planet, on Earth, that we are floundering at solving. Meanwhile, this larger space issue is manifesting in the background; I fear no one is paying attention. If we can’t solve complex issues here—gun violence, climate change, starvation, war—how will we ever come to agreement on these questions about space, and saving the night sky?

We start to climb
a long hill but
now
places change.

Saw-teeth and tread roll
out the wide wheels
groaning and whining
branches break.

Where are we climbing to?

I wish people would find alternatives to lethal elimination of wildlife and insect “pests” from their property. In the past few weeks, I have learned of sad situations, in my supposedly nature-loving state of Vermont, in which humans have deemed a particular critter a “pest” and animals suffered as a result.

In one story, a resident was out for a peaceful walk when she came upon a raccoon in a steel leg-hold trap in a culvert. The animal was in terrible pain, and it was later discovered that the critter had a compound fracture on the leg that was clamped in the trap. Raccoons have heightened sensitivity in their front paws for feeling around for their food in rivers and such. Imagine the agony of having this appendage in the trap for hours and hours. Turns out the town road crew was setting the leg-hold traps to catch beavers as a way of maintaining their roads. The suffering coon was “by-catch.” After a public outcry and citizen letter writing, the town has thankfully pledged to cease the trapping and will find other nonlethal ways of mitigating the issues they perceive with wildlife. Let’s hope they keep their word.

In another recent story, a homeowner had decided a raccoon needed to be removed from her property. So she called a professional “pest elimination” company to come trap it, under the impression that the company would simply relocate the animal. (I am pretty sure relocating is deemed illegal, so not sure why she had that idea.) Instead she discovered that the pest elimination company had water tanks where they submerged the live animal in the cage to drown it. This is a process that takes up to six minutes. And in a cage. No escape. Imagine the panic. This process has been deemed inhumane by even conservative veterinarian organizations.

Then there are the various medieval-style torture traps for mice sold at the local Aubuchon Hardware store. Hard plastic boxes that allow not enough air so the critter suffocates. The worst – the glue boards that trap the mouse by sticking their feet in place. Thus immobilized, they die a frightened death of dehydration. Meanwhile, researchers have found mice to be incredibly family-oriented, with complex social systems. Do they really deserve such treatment for simply trying to find food and warmth? These are Maslow’s basic needs.

My slate is not crystal clean. I am not finger-wagging. But I’ve been significantly re-framing the notion of wildlife (and insects even) from “pests” to “community members” at my place of residence, and in the world at large. Since sixth-grade science class, when the idea was taught that all living organisms are connected in a complex web, I’ve felt this. But as an adult, I’ve been challenged to really live in a fashion of interconnectedness.

My story: I have had skunks live under my porch on and off for years. In my misguided thinking, I thought I must remove them since I had a dog and a cat. So I hired a trapper who, after careful research, I found was one who put them to sleep with an injection. But I was soon dismayed because every day he was trapping a new skunk near my house. Where were they all coming from?? As the death toll mounted to 5 or 6 beautiful black and white skunks, I felt like scum. The final straw was when the trapper had set the trap somehow at the drip-edge of the house eaves. And it poured all morning! I watched an adult skunk basically get water-boarded for four hours, water streaming off the drip-edge like a waterfall. I tried again and again to approach the trap with a tarp, but the skunk, understandably highly agitated, prepared to spray. I frantically called the trapper to say, please come soon! After that, I swore I would never ever again call someone to trap another animal.

Since then, sometimes a skunk or several winter under the porch. Other than an occasional light waft of “Pepe Le Pew,” they never cause a problem. When they wake up in the spring, there is sometimes a spray or two in the yard, but it dissipates in a day and no big deal. I wish I could put out some rabies vaccine bait, just in case, but am not sure how to obtain it…or if I even am allowed to. But otherwise the skunks, my cat, and I have cohabited peacefully (my old dog passed away).

And then I discovered that resident skunks have a benefit! I had a ton of Japanese beetles in my gardens and on my berries. All summer I would grimace in disgust while plucking the beetles off my plants to drop them in soapy water, where I am sure their drowning took equally long. I felt awful as I watched the beetles try to climb on top of one another to get to the top of the dish for some air. Horrible. I quit doing that method which had been highly recommended both online and by fellow gardeners. But soon I noticed the skunks were digging all over my lawn. Something that would send most homeowners over the deep end. Instead of getting mad, I researched online and found the skunks were eating the Japanese beetle grubs. Now I have no more Japanese beetles, without nasty pesticides! And my lawn looks just fine.

I also have a resident groundhog. Other neighbors consider them “pests” and shoot them. Even the babies. So sad. I call the groundhog in my yard “Chubby.” He (or she) has never once troubled my garden—I simply put a short wire fence around it. Veggies are untouched. Mostly the groundhog eats the clover in the lawn. And I have not seen a big invasion of groundhogs, as most folks online fretfully caution.

Last, one time a colony of carpenter ants came in on a piece of firewood in my fall wood delivery. Soon the ants ventured into the house! Tons of them. After several failed attempts to stop the problem with organic methods, I resorted to calling pest control. The guy came and sprayed all around the base of my house, for two years in a row. He wore only a light protective jacket and had his kid with him. He was a nice fellow, but wasn’t he worried about toxic exposure? I asked him about the safety of the stuff…for me, my dog, and my cat. Oh, just fine. Not dangerous at all. This was about 5 years ago. Still, when the crickets come out in late summer, I find a few crickets (and spiders and moths) who have the misfortune to hang out near the base of my house. Soon they are writhing in a chemical-nerve agent twitchy sort of death. The stuff he sprayed is still deadly. Not just to ants. Probably to us! Next time, I will be wiser. If carpenter ants come in on wood, I will not throw it in the brush pile (duh!!). I will carry it far into the nearby wild woods, so the ants are not deposited on my property. I am also in progress to redo the base of my house with solid flashing to prevent insect and mouse access. Really, the mitigation of these problems is up to me and my nonlethal, non-toxic ingenuity (well, and that of a trusty carpenter).

Anyway, I am finding, the more I just work to cohabitate with the wild creatures, the more peaceful, humane and even beneficial our relationship becomes. And guess what—my property is just fine. Side note: since as a human species I am only here for, if I am lucky, 80–100 years, I really don’t view the land as “my property.” It is land on which I live for the short time I exist. It is land that will exist long after me. The land belongs to plants, and trees, and insects, and wildlife, and for now, me. The land essentially belongs to Earth.

A silly little poem I wrote, but what the heck. It’s all about the images that follow. For more on my thoughts about lawns, read my earlier blog post “Musings on Mowing the Lawn: An Environmental Conundrum.”

Delay the engine, the crush of wheels,

pollinators of all sizes are needing their meals!

than a lawn trimmed up tight 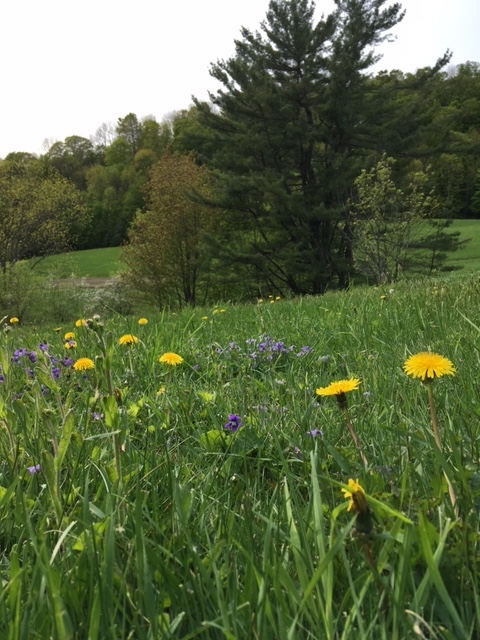 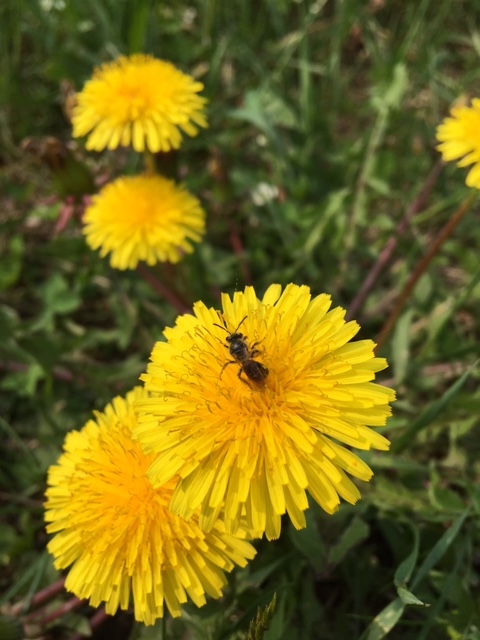 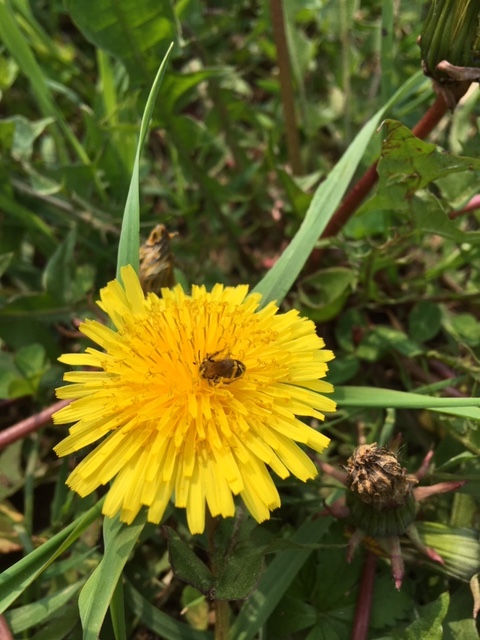 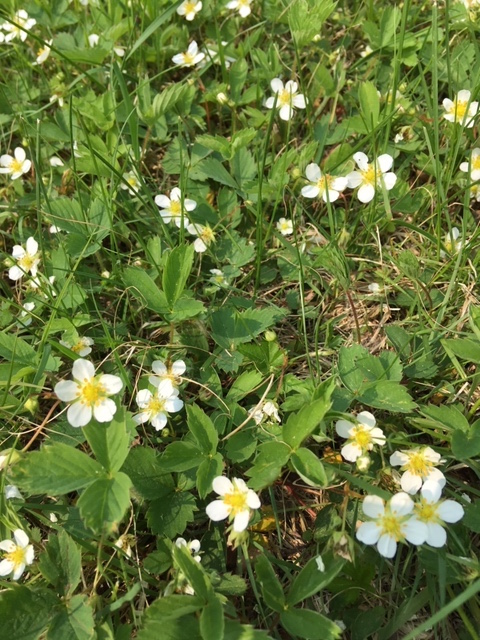 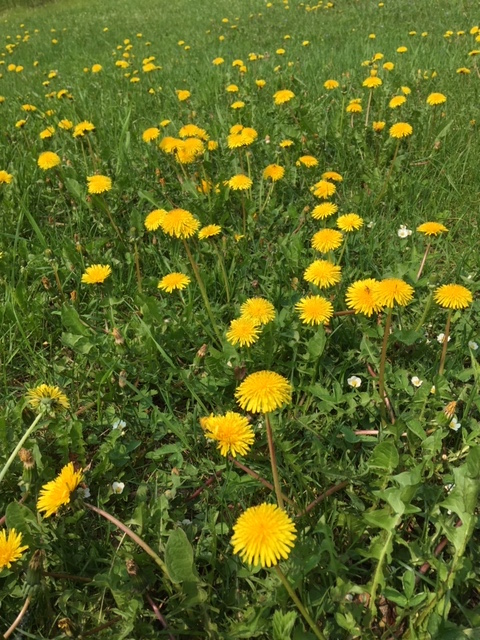 SHINE OF A LUCID BEING